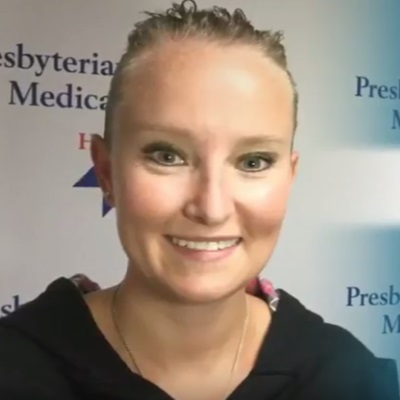 When Jessica Barton was 12 years old, she was knocked down by a dog in a park. She was taken to the ER, but was sent home when doctors couldn't find anything wrong. A few months later, she woke up with excruciating pain in her back. After several exploratory surgeries it was discovered that Jessica had actually broken a bone in her back which cut into a nerve, causing her pain. Due to the multiple surgeries she underwent, her pancreas began to attack itself. By the time she was 27, it had become pre-cancerous and needed to be removed. As a side-effect of this surgery, Jessica suffered from extensive abdominal nerve damage which caused her tremendous pain. Her back doctor referred her to Dr. Giancarlo Barolat at Presbyterian/St. Luke's Medical Center to find out if neurostimulation would work for her. During her first visit, Dr. Barolat told Jessica that he was 100% sure he could help her. And he was right. Four days after surgery, Jessica ran a 7K with no problems.

More than anything else, Jessica was impressed by the personal care she received from Dr. Barolat, especially in the days following her surgery. "I've never had a hands-on experience so positive."