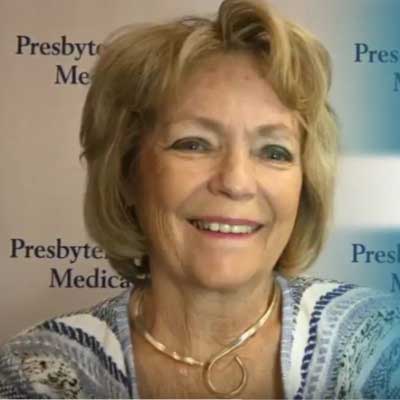 In November 2015, Nancy Moeglein was experiencing bowel issues which led to a diagnosis of diverticulosis and later, an attack of diverticulitis. During the summer, her condition progressed to a more severe, painful infection prompting her to set a meeting with a gastroenterologist who recommended a colonoscopy. The test revealed that Nancy had a thickening in the lining of the sigmoid colon and surgery was required.

She was recommended to a surgeon for conventional surgery (six days in the hospital and six weeks recovery post-op) however, in August, her condition worsened and her pain became unbearable prompting her to go to her local emergency room. Her surgeon was out of town at this time so she was referred to Dr. Tony Canfield, robotic surgeon and Medical Director of the Center for Robotic Surgery at Presbyterian/St. Luke’s Medical Center. She spoke with him that same day and had an appointment with him that following day.

Nancy had her colon removed robotically. She experienced no pain during her entire procedure and recovery time. Instead of the originally-proposed six days in the hospital and six weeks recovery, she was in the hospital for just a day and a half and felt almost back to normal just one week post-surgery. She states that meeting Dr. Canfield is a “blessing” and she is so grateful to the amazing team that treated her at Presbyterian/St. Luke’s Medical Center.

Learn more about the Center for Robotic Surgery